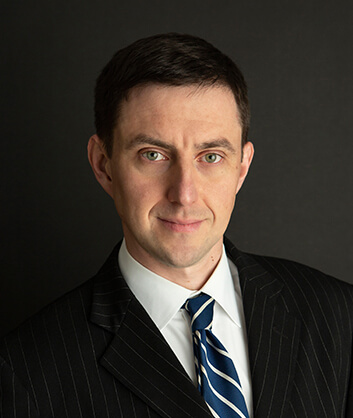 Ryan received both his B.A. and Juris Doctor degrees from Northern Illinois University (2002, 2008). While attending NIU College of Law, assisted in the creation of the Real Estate Law Society and served as Vice President during its first year. He was a member of Delta Theta Phi Law Fraternity. Since working at Roberts & Caruso, Ryan’s work has been published by the DuPage County Bar Association.

Before law school, Ryan was a member of the Illinois Air National Guard for nine years. From March 2003 to November 2003, he worked as a Supervisor for Tactical Electronic Equipment in Kuwait and Iraq for Operation Iraqi Freedom. In 2003, he was awarded the Air Force Commendation Medal and has received various other awards for his service to this country.

While working at Roberts & Caruso, Ryan has handled the litigation work for various individuals, businesses and estates. Ryan’s litigation work has ranged from motion practice to handling the accountings for a complex multi-million dollar estate. From home owners in a home remodeling case to heirs in a disputed will, Ryan has represented a variety of clients from the beginning of their case through trial.

Ryan is also active in the political community. Ryan is a member of the DuPage County Young Republicans and he has assisted numerous political officials on their campaigns.